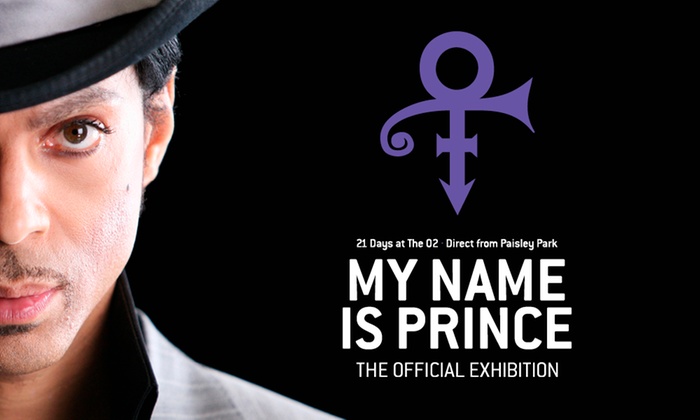 We took the VIP experience so we waited in the small downstairs march shop and waited until we were called up. We were led through the main entrance to a small side room where we could leave our coats and were given a tote bag with a laminate and programme inside. We were informed what the VIP experience included and were led into the main exhibition hall and into another side room. In here, there were many trunks that were used to transport Prince's clothes and instruments.


There was a replica set-up of his dressing room table with his make up and items placed out. The main advantage of the VIP experience was getting to hold one of Prince's purple guitars (it was used mainly in 2004 during the Musicology Tour) It felt strange holding it. It was a very heavy guitar and was a deep shade of purple. We were then showed some live footage from the 2007 O2 shows.


Some of the outfits had sketches next to them showing the designers original ideas which was interesting to see.

We then went back to the waiting area and had a drink. We were then free to go back to the main entrance and enter the exhibition.

We got out audio players and went in, starting at the beginning of Prince's career in 1978. The exhibition ran fairly chronologically starting with some of his early instruments and photos moving through to the 1999 era and Purple Rain where many outfits were displayed along with note pads and other bits and pieces. I was struck at how petite Prince's frame was. A lot smaller than he seemed in concert.

Some of the outfits I seem to remember were the colourful paisley suits from the Purple Rain tour, both the 1999 video and Purple Rain movie purple trench coats, the 'Hot Thing' suit from the Sign "O" The Times tour, the 'Gemini' suit from the "Batdance" video, the 'Lovesexy' jacket (which looked huge!) and The Gold Experience suit from the 1995 American Music Awards. It was quite overwhelming having so many outfits around, I kept having to go back and check I hadn't missed any. 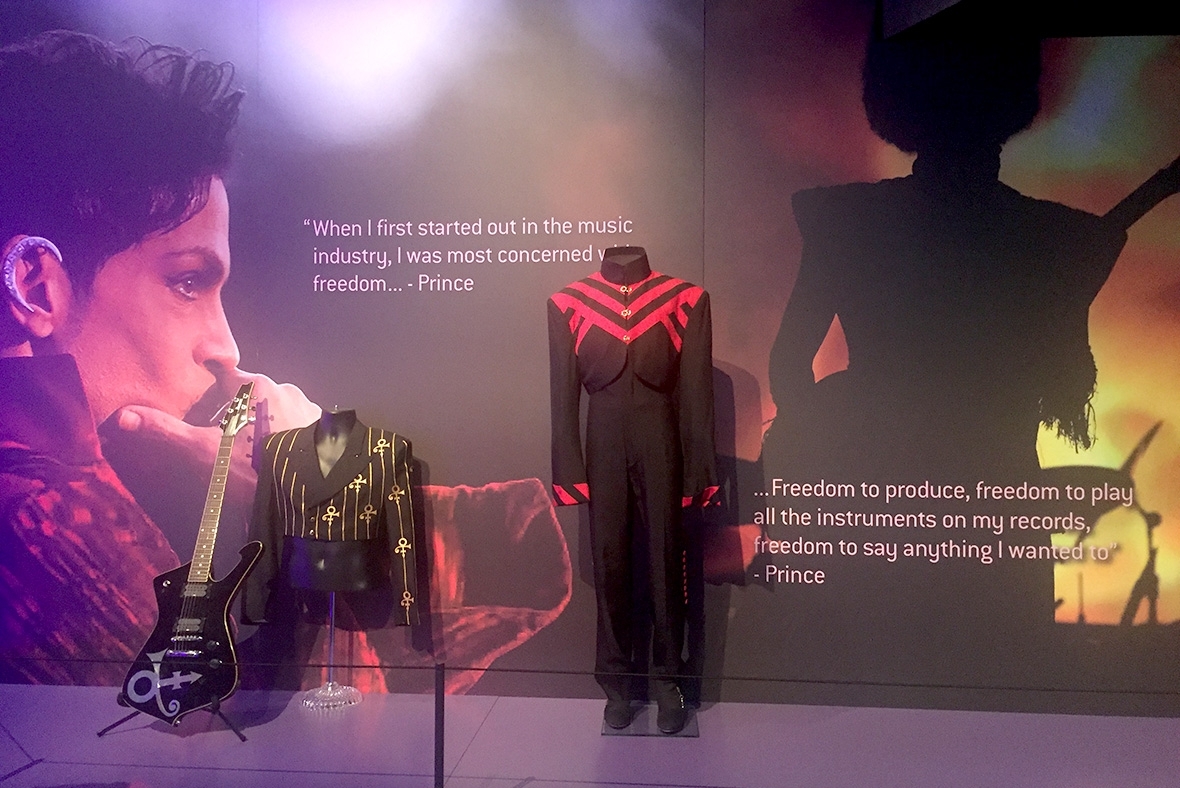 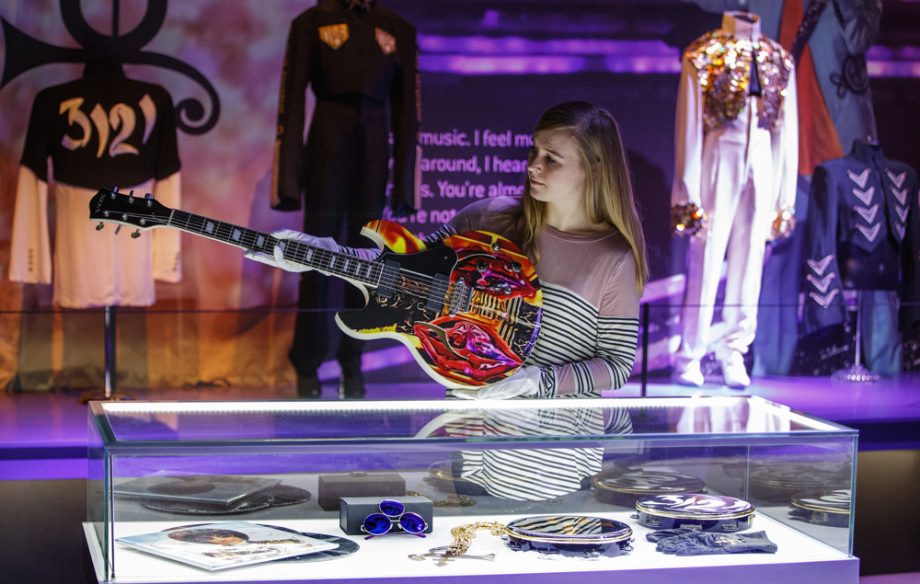 The main hall area had a large symbol-shaped stage in the centre and focused on his later career and had many videos (1999, My Name Is Prince, Gold) and performances (Rock & Roll Hall of Fame, Super Bowl) being shown. There was a section that featured images of Paisley Park (a way of getting people to visit the museum over there, I think) with lots of video footage of the studios playing. The audio guide gave a basic history of Prince's life and career, nothing I didn't already know. The exhibition was quite busy and seemed to be a mix of die-hard fans with more casual, curious fans.

The end of the exhibition had a replica of the gate outside Paisley Park on which fans had left messages and artwork after his passing in 2016. After this we went to the larger merchandise store to get some items. I picked up 3 hardback books: Paisley Park Studios, covering the history of the recording studio, Fashion, showcasing many of his outfits and lastly Instruments which covered his guitars and other instruments. The books were £25 each but were high quality and featured gorgeous photographs. There were many other, fairly expensive items on sale. If money was no object I would have probably bought more but the books were enough for me. 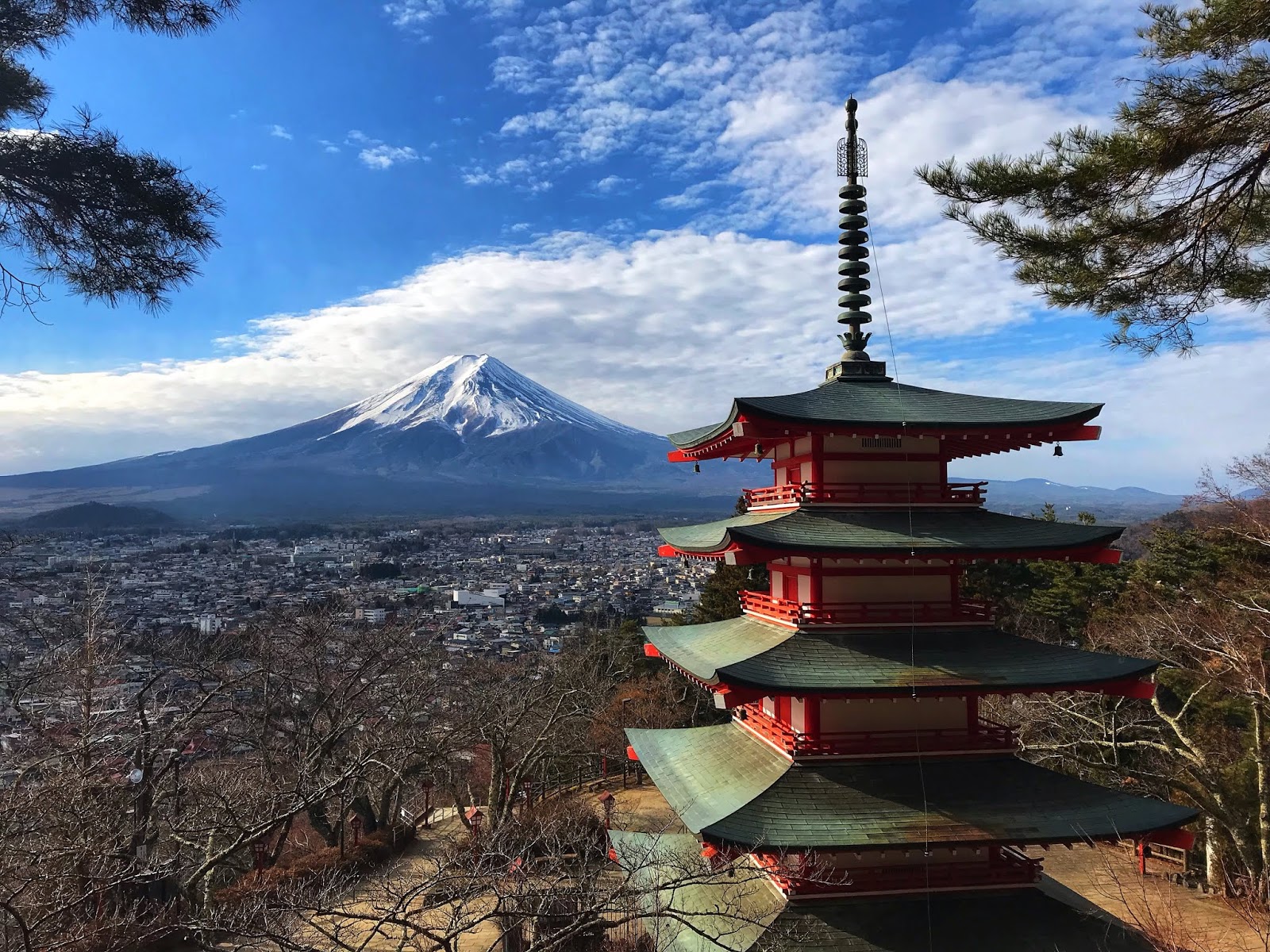 After an amazing Tim in Osaka we moved on to Mount Fuji. We hired a car near the train station at Fuji and drive towards our hotel at Lake Kawaguchiko. The drive gave us an amazing view of Mt. Fuji as we drove along the long roads, surrounded by fields and mountains. It was a nice break from the busy cities.

Our hotel was opposite Lake Kawaguchiko and our window had a stunning view of Mt. Fuji. We walked over to the lake as the sun was setting to take some pictures and look at Fuji. It was freezing cold but we enjoyed the sight and felt very lucky to be there. we headed out in the car and drove around the lake and then got some dinner. We went back to the hotel for a rest in the warm room. Our host did not speak English but was very helpful and welcoming to us.

The following morning we got up early to catch the sun rise. We drove to a nearby cafe/shop by the lake and got a few souvenirs. We were very lucky to get a clear view of Fuji as it is often obscured by cloud.

We drove to the …
Read more